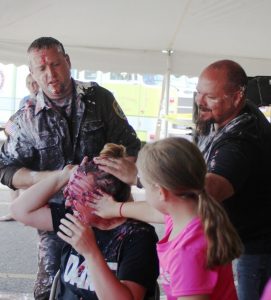 Peterson and Short take a little revenge on Teresa Chrisman, the organizer of the fundraiser who had not expected to be “pied”.

After taking five cherry and whipped cream pies to the face on Saturday during the U.P. Firefighter’s Tournament, Deputy T.J. Peterson decided to share the fun with fellow deputies Teresa Chrisman and Mike Short. Pulling together scraps from the “used” pies, he was able to assemble enough pies to auction off a pie for each of his colleagues.

Dozens of spectators gathered around for the “pieing” to record the event on their phones.

For the full story see this week’s issue of The Florence Mining News.