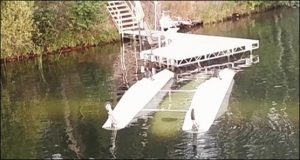 Just the plane’s pontoons were visible. The whole plane was submerged into Otter Lake in Elcho Monday evening. 65 year old Roger Hillberg of Crandon was not injured.

Roger J. Hillberg, 65, of Crandon, flipped his float plane while attempting a landing on Otter Lake in Elcho on Monday, August 7, at around 7:30 p.m. Hillberg, the lone occupant of the plane, was able to escape uninjured.

Hillberg, who keeps his plane in Rhinelander, took off from the airport with Otter Lake as his destination. He told authorities that he was distracted by another aircraft on takeoff and forgot to raise his landing gear, causing the crash. The landing gear should be retracted into the pontoons for safe water landings.