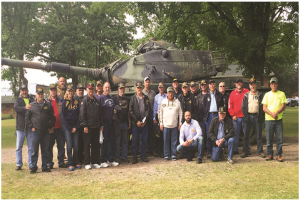 Larry Alsteen and Dan Papapetru were two of several veterans that took a trip the Highground Memorial Park in Neillsville on August 4. Sheriff John Dennee also made the trip. He said, “The trip to the Highground was totally awesome. I would totally recommend it to everyone.”

The veterans said they first toured the Korean War Memorial. The memorial “is like a circle on the ground,” made of brick with all the soldiers names of those who died serving the country. Within the circle and in the center are additional plaques, including Native Americans from different tribes within Wisconsin who fell serving their country during the Korean battle. Approximately 36,500 soldiers in total lost their lives in the Korean War.