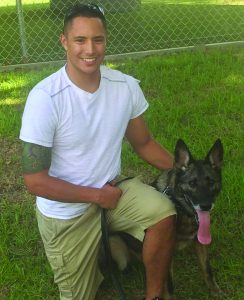 Harrison, originally from Florence, has been serving in the U.S. Air Force for five years, after joining in September of 2012. He works as a military working dog handler, and has been deployed twice to the Middle East. He will be deployed next month for a third time to the same region, and currently is stationed in Valdosta, Ga.