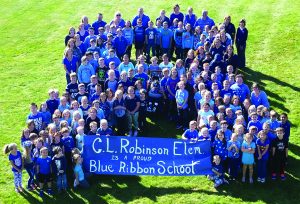 U.S. Secretary of Education, Betsy DeVos, announced Laona’s Robinson Elementary School has been named a 2017 National Blue-Ribbon School. It is one of nine Wisconsin schools to receive this honor along with 342 schools nationwide.

The National Blue-Ribbon School Award affirms the hard work of Laona students, educators, families, and communities in creating safe and welcoming schools where students master challenging content. Schools are nominated by their state department of education and then complete a comprehensive application about school practices. Schools may be nominated as an Exemplary High Performing School, the top schools in a state, or an Exemplary Achievement Gap Closing School, schools making the fastest progress in their state in closing achievement gaps among student subgroups. Laona’s Robinson Elementary received the award as an Exemplary High Performing School.