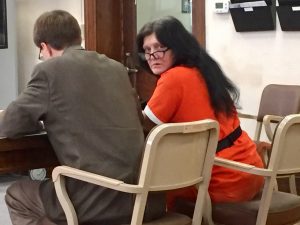 On Tuesday and Wednesday, Oct. 17 and 18, Patty Kirker’s civil trial continued at the Forest County Courthouse in front of Judge Russell of Lincoln County. Kirker is charged with several felonies and misdemeanors regarding the abuse of animals she had kept at her home on County Road S, “Long S”, in Crandon. The charges stem from a raid of her premises involving the ASPCA and several other agencies in March of this year. Kirker is also faces felony drug charges. She currently is out on $2,000 in bail, on each case ($4,000, total).

After lengthy testimony on Wednesday and Thursday by Kirker regarding her background in care for animals and her vaccination schedule for the animals in her possession, the defense argued the expertise level of some of the examiners brought into the case.