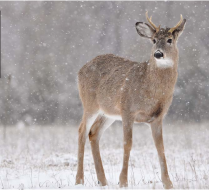 On November 30, citizens reported a young buck in Long Lake acting oddly. The small buck had a spike-horn on one side and the other antler was broken. The deer was walking in circles with its head tilted and would allow people to pet him, as well as licking their hands.

“Even though the deer looked healthy, the behavior caused us to be concerned,” said Wisconsin DNR Wildlife Technician Brittany Henderson.

The deer was killed and a necropsy was conducted. According to Henderson, an investigation of the skull showed a puncture wound between the antlers into the brain, which can happen when bucks are sparring.