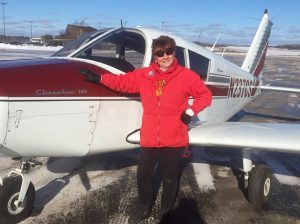 The author with the Piper Cherokee airplane that she flew with the guidance of pilot Bruce Rutter of Niagara.

Off we go, into the wild, blue yonder. . . and that is exactly what this writer was fortunate enough to do on Saturday.

Thanks to Bruce Rutter, a local private pilot, I flew (yes, I was the pilot) a Piper Cherokee 160 HP single engine airplane out of Ford Airport for a one-hour, adrenaline pumping ride of my life.

Flying at an altitude of 5,500 feet at 160 miles per hour on a cold winter day, high above the clouds, soaring over towns, buildings and trees, is a thrill like no other.

Based out of Kubick Aviation Services at Ford Airport, Rutter, who obtained his pilot certification in 2003, uses his own private plane for flying lessons and other services.

“We have six active pilots in the program,” said Rutter. “It’s all volunteer, but a doctor needs to authorize each flight before we can transport a patient.”

Rutter, who lives in Niagara, has been on call with Northwoods Airlifeline for over 112,000 hours and 200 flights.

“I love to help others,” he said. “I learned that from my father who was a police officer in Benton Harbor, Mich., he taught me a lot about compassion.”

In addition to his volunteer efforts with Northwoods, Rutter has also been the chairperson for United Way, Muscular Dystrophy and the March of Dimes.

“I don’t do anything for publicity, I do this because I can,” said Rutter. “The average pilot would fly 35-50 hours a year, but I have over 3500 hours of flight time, including flying patients for Airlifeline.”

In June of 1992, Rutter was involved in a life-threatening car accident, which led to just over three years in the hospital, as well as multiple surgeries. He was told he would never walk again.

At the time of his accident, Rutter owned several Subway restaurants in Appleton, and had a passion for cars.

“I was always a car nut, I collected and painted them too,” said Rutter. “Someone noticed one of my paint jobs and asked me if I would paint their plane for them. For payment, I was given the choice of money or take flying lessons. And that is where it all started.”

After he obtained his pilot certificate in June of 2003, Rutter bought his own plane, and has been flying ever since.

“You are required to study two to three hours for every hour you fly,” explained Rutter. “Flying the plane is the easy part, it’s the bookwork that is much more difficult.”