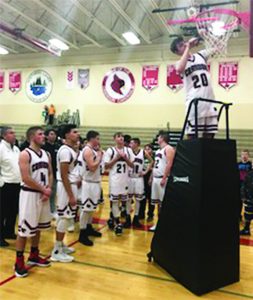 Coach Jim VanZile looks on as his Champions take their piece of the net.

The Crandon Varsity boys basketball team played a three-game marathon to capture the title of Co-Champions of the Northern Lakes Conference.

Cards took their first game against Goodman-Pembine 84 to 43. Deion Okrasinski started the first night, Feb 5, by making a quick two points for the Crandon team within seconds of the start of the game. Okrasinski went on to make eight points during the game with Goodman-Pembine. He was followed closely by Tyler Tichenor who scored a quick two points and went on to be the high score player for the night with 17 points.