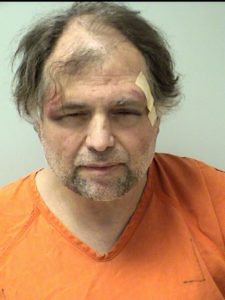 An Aurora man charged in a domestic violence case got in an argument with a 77-year-old man found dead in his garage in Wausau days before his death, according to court records filed in Marathon County.

Lee Franck, 56, has been charged with two counts of disorderly conduct, involving domestic abuse. A judge ordered he be held on a $750,000 bond Thursday. Franck is considered a “person of interest” in the murder of Lyle Leith, according to Wausau Police Department.

Franck was arrested Wednesday in Florence County. Officials say he resisted and it took a great deal of force to take him into custody.

“Our staff and those SWAT teams from the northern counties spent numerous hours at Mr. Franck’s house trying to negotiate his surrender from inside his barricaded residence,” Barnes said. “Ultimately it required the use of force and tactical equipment to be able to gain entry into Mr. Franck’s house to take him into custody.”