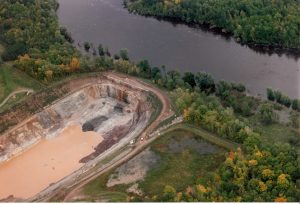 Following a public hearing May 8 on the adoption of a new mining ordinance it was decided by the Forest County Land and Water Resources Committee to reduce the thirteen-page document down to one paragraph. Rebbeca Roeker, representative from the Madison law for the Wisconsin Counties Association, was there to answer public questions and give input on portions of the new ordinance.

She said the Forest County ordinance covered issues that the county no longer has control over because it is now covered in the state bill that lifted the mining moratorium for the state of Wisconsin. The bill was signed on Dec.11, 2017, and will be enacted on June 1, 2018. Most bills take effect immediately but Republican Rep. Jerry Petrowski amended the moratorium bill to delay its effective date for six months. Petrowski said he wanted to give local governments time to develop their own mining ordinances, saying in a letter to the Wisconsin Counties and Towns Association that sulfide mining carries “inherent risk.”