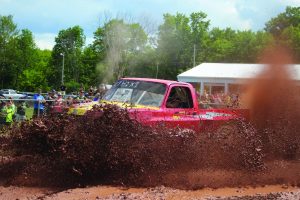 A last-minute cancellation on Saturday night shocked the many people planning to enjoy the challenge of the Aurora Mudd Runs the next day. The popular fundraiser for the Aurora-Homestead Rescue Squad has a been held on the first Sunday of August for over two decades and the announcement sparked angry, confused and disappointed responses.

Organizers made the decision when they realized insurance for the event had not been secured.

“During a review on Saturday afternoon the question came up about the event insurance. It was at that point we discovered we had not purchased event insurance as it was not on the checklist. Several people spent several hours trying to resolve the insurance issue with no success,” explained Sheriff and Aurora-Homestead Rescue Squad member Jeff Rickaby. “This is a racing event and the insurance generally takes more than a week to obtain and has to be reviewed and approved by an underwriting agency.”

Rickaby said the oversight occurred because several duties were reassigned to different people this year due to the retirement of a long-term rescue squad volunteer. Rickaby said most of the duties made it to a master checklist, but event insurance was left off the list.

“The insurance for our one-day event is between $800 and $900 for the 24-hour period surrounding the event. Unlike our personal auto or homeowner’s insurance, no reminder to renew is sent out,” said Rickaby.

He apologized for the situation, but said the group agreed that the event could not proceed without insurance in place.

“This is clearly the fault of our entire group as no one inquired about insurance earlier because the recently retired person had always purchased the insurance without help from anyone else,” he said. “In the end, we felt it would irresponsible to hold the event if we did not have proper insurance coverage. As one of our members stated, ‘this is the only thing that could stop us from having the event’.”

He emphasized that the cancellation had nothing to do with a property line issue.

“We would like to thank all the people who were patiently disappointed we made the decision to cancel the Mudd Runs at the last moment,” said Rickaby. “We are fortunate each year to have many sponsors for the Mudd Runs which help defer the costs of the event we can’t thank them enough for their continued support. We have nearly 45 volunteers some driving from Milwaukee to support and work at the event. Most importantly we sincerely appreciate the estimated 4,000 people who come each year supporting us while enjoying an afternoon of good clean fun.”

As of press time, the event has not been rescheduled.