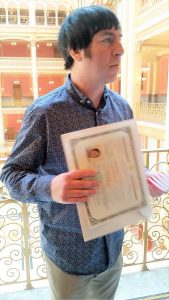 Walk into the Subway in Florence on any given day and you will most likely be greeted by an employee with a contagious smile and a distinctive British accent.

Meet Craig Connell, 48, of Florence – a newly inducted citizen of the United States of America.

Connell, born and raised in Gillingham, England, visited the United States in 2004 and moved here permanently in 2005 to marry his wife, Michelle, a Florence resident.

“I met my wife through a web site for people who write short stories and poems,” explained Connell. “We started exchanging messages on that web site, then we began sharing emails, and finally she called me.”