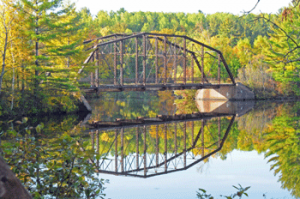 According to witnesses, several teens were swimming near the Badwater Train Bridge when one swimmer became distressed in the heavy current. Several other teens entered the current to try to help. The original swimmer made it safe to shore, but one of the teens who was attempting to help was swept away in the heavy current towards the Wisconsin side shoreline. The swimmer, identified as Bryan Christopher Stanchina, was last seen near the shoreline by the private access road to the Twin Falls Power Dam.

Boats were deployed with search teams made up of law enforcement, Breitung Township Fire Department and civilian volunteers. The Delta County Dive Team was on the scene and assisted in locating the victim in approximately 14 feet of water near the location where he was last seen.

According to reports, that part of the river had very strong currents and recovery was difficult. Search teams were eventually able to remove Stanchina from the water to the Wisconsin shoreline where he was pronounced deceased by the Florence County Coroner. He was then transported to Dickinson County Health Systems in Iron Mountain.