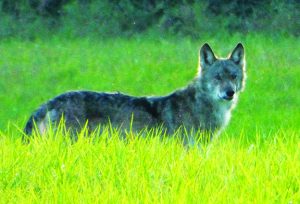 This gray wolf was sighted August 28, in Aurora, trotting across the field on Peterson Memorial Drive. Charles McCullough wildlife biologist with the DNR Wildlife Management Northern District stated, “Living in northern Wisconsin means living with wild things.  I always appreciate seeing bear or wolf tracks. Hearing a wolf howl or seeing one reminds me that the northwoods is a special place.”

Though still a rare sight, it is possible one may come across a wolf in Florence County these days. Once almost extinct, the gray wolf has made a comeback due to state and federal protection put in place in the late 1970s.

According to the Wisconsin DNR, wolves are generally shy of people and avoid contact with them. Any wild animal, however, can be dangerous if it is cornered, injured, sick or has become habituated to people through activities such as feeding. In the case of large predators, like wolves and bears, it is particularly important for people to avoid actions that encourage these animals to spend time near people or become dependent on them for food.