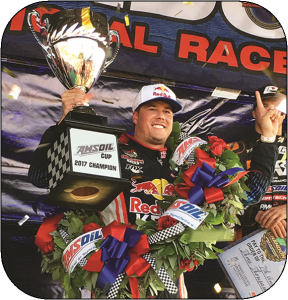 For 48 years, Crandon International Raceway has celebrated the biggest weekend in short-course off-road racing, and it never disappoints. It was a soggy start to the weekend as TORC: The Off-Road Championship presented by AMSOIL hosted Round 11; and the world’s best off-road racers battled for the “Keys to the Big House”. With heavy early morning rain, the track served up a tricky combination of mud, fluff, and slick racing groove. Yet, that didn’t deter the record-setting crowds from filling the stands and blanketing the hillsides adjacent to Crandon’s legendary Turn One. The path to this year’s PRO 4 championship has been a father-son dog fight since the first race. Coming into the weekend, only 10-points separated CJ Greaves and his father Johnny atop the year-end points standings. While both Chad Hord and Ross Hoek looked to shake up the pecking order early in the PRO 4 final, it eventually turned into another Greaves duel that went down to the final turn.

From the green, it was Johnny getting the early jump and plenty of open track to do what he does best…lay down some wicked fast lap times. In fact, Johnny led every lap, except the one that mattered most. CJ Greaves didn’t have the best of starts, collecting plenty of roost within the cab as he watched Hoek and Hord battle for position ahead of him. But it was their back and forth intensity that eventually opened the door for CJ to pass both and set his sights on his father.