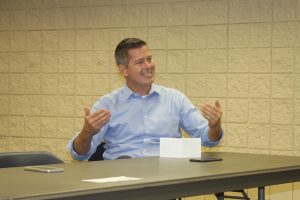 The meetings were moderated by Wisconsin Rep. Tom Tiffany and were a forum for residents on topics such as healthcare reform, property taxes, North Korea, social programs, road funding, the foster care system, the delisting of the gray wolf and the J1 Visa program.

At the meeting in Florence County, eight residents showed up to speak with Congressman Duffy. The first topic brought up by Jerry Tibbs of Fence was the threat of war with North Korea. Acknowledging, the longstanding hostility, Duffy said, “North Korea is a bipartisan failure.” He went on to explain that he thinks rash decisions could be extremely dangerous. “Can we destroy them? Yes. Will there be mass casualties? Yes. The casualties would be catastrophic.” Duffy also noted that he felt that this administration is making more progress than has been made in the past 25 years with North Korea.