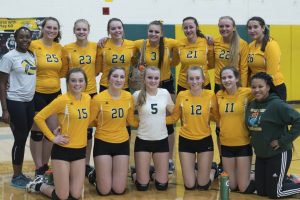 The Florence Ladycats volleyball team is going to Sectionals. After an undefeated conference season, the team nailed the win in the final regional game against Wausaukee on Saturday.

Coach Joan Canfield had confidence in her team, but was also aware of the danger of being over-confident.

“Everybody has a clean slate. And everyone is trying to reach the same goal. I was hoping we would win. But I knew it was going to be a battle,” she said.