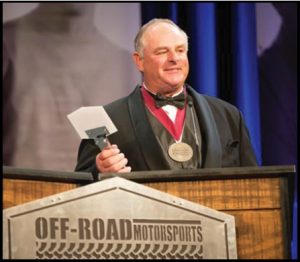 October 30 was a big night for Cliff Flannery, President of Crandon Off-Road, as he was inducted into the Off-Road Motorsports Hall of Fame (ORMHOF). The ORMHOF 2017 Induction Awards Ceremony presented by SCORE was held in Las Vegas at the South Point Hotel and Casino. The gala was sold out. Crandon International Off-Road friends, family and associates accounted for 96 of the guests that attended.