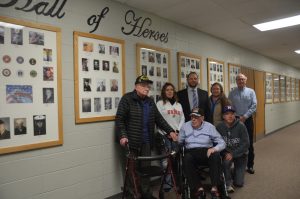 Fred Rhodes and Grant Allred, who were on the beaches of Normandy on D-Day on June 6, 1944, were interviewed by former Niagara School principal Kerry Grippen about their experiences on that fateful day.

Many countries were represented on the beaches of Normandy, including Australia, England, Canada, Norway and Holland, to name a few.

For the full story, see this week’s edition of The Borderland Journal.