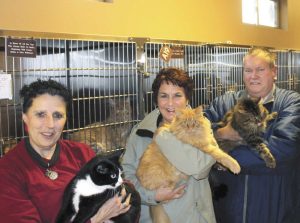 When Sheila Henrichs’ mother Louise Lantagne passed away in July, she left her inheritance to her children in her will. According to Henrichs, four of Lantagne’s children received a share to spend as they pleased. There was a catch to Sheila’s portion, however. It was earmarked to be donated to the Almost Home Animal Shelter in Quinnesec.

An animal lover, like her mother, Henrichs lives on Keyes Lake in Florence County and has three dogs: a Labrador retriever and two Cavalier King Charles spaniels named Marley, Ruby and Henry. She has two cats who are brothers, her cat, Dewey, and Punkin, who was her mother’s cat.

She recently donated the inheritance to the shelter in the amount of $13,230.28. A memorial plaque will be hung naming Don and Louise Lantagne.