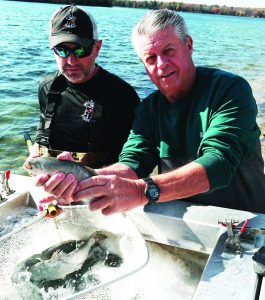 Three hundred lake whitefish (Coregonus clupeaformis) were stocked into Lake Lucerne on October 19. The fish were around 15-18 inches, large for their age due to being hatchery-raised in an environment facilitating accelerated growth. There were no antibiotics or chemicals used in the raising of these fish and they were fed a pelleted feed.

Eggs were taken from lake whitefish in a lake within the Lake Michigan watershed in November 2015. The eggs were incubated, and the fish were raised by senior scientist Fred Binkowski and his aquaculture lab at the University of Wisconsin-Milwaukee School of Freshwater Sciences.