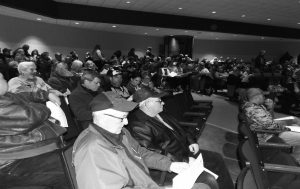 The recall information presented to Nadine Westimayer, was signed in the wrong place, according to Tim Reeder, spokesman for the group during a meeting at the Crandon Public Library April 12.  Reeder said he was informed by the school that the paperwork was sent to the school attorney to see if it was still valid.

The group was informed that they would need 25% (63 votes) of the 252 signatures needed for the recall from the voters that voted in the last governor’s race. The remainder of signatures can be from eligible voters in the Crandon School District. The group consensus was to go ahead and prepare recall petitions on three more school board members later this month.

For the full article see this week’s issue of The Forest Republican.