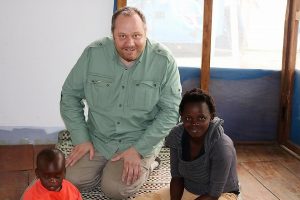 Billy McCoy at Mwana Villages during his 2017 trip to Republic of Congo.

What began as a surfing and camping trip in 2010 has evolved into a mission for Billy McCoy, 42, of Florence. A non-traditional student pursuing a bachelor’s in French language and literature at Northern Michigan University, McCoy plans to spend the next several months studying abroad at Institute Francais du Congo, a private school run by the French government in Brazzaville, Republic of the Congo.

He will leave in early August and before classes start, he will be serving an internship at Mwana Villages, an orphanage based in Pointe Noire, Congo. This will be his second trip volunteering for the organization, which serves mothers and orphans in the impoverished area.