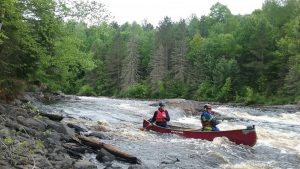 We Energies began lowering the reservoir upstream from the Pine Hydroelectric Power Plant near Florence on May 21. This is creating unique opportunities for recreation, as well as some hazards that anyone taking to the river should be aware  of. The temporary drawdown is required for necessary maintenance at Pine Dam.

According to local paddling enthusiast John Roberts, of Aurora, the reservoir has been dropping by about a foot a day over the past two weeks and has evened out at a level about 10 to 12 feet below normal. He noted in his blog that during the maintenance drawdown, no water will be diverted around Breakwater Falls and gorge-rapids below the Pine Dam and the lowering will also expose additional rapids and both twin falls just upriver from the flowage.

“Having both these spectacular falls runnable at the same time with the same flow has not been available since the last drawdown in 1993,” he wrote in an article for the American Whitewater website.

We Energies has warned people to use caution and take heed of signage and closures in the area since there are changes in the river flow patterns and areas of the bank that have become unstable as the water level drops.

“Where the river has cut down through the exposed lake bottom the vertical edges of sand or mud are not stable. Until they remodel and dry out the newly exposed ledges of sand along the river are collapsing into the water steadily. It is not safe to be up on the new land in these areas. There may be newly exposed areas of soft sand or mud elsewhere too,” explained Roberts. He has been going out on the river every day since the drawdown began and recording his observations on his Facebook blog. He added that no matter what the water levels, paddling rivers is an inherently a hazardous activity that may result in injury, loss of equipment, or death.

That being said, as an unofficial ambassador for the Wild Rivers, Roberts encourages everyone to experience the beauty and excitement of the rivers, but to seek guidance from seasoned paddlers if new to the sport.

“I love showing my favorite rivers, the Pine and Popple, to friends, actually to anyone, but especially first time visitors,” he said. “I know these rivers well. They are a part of me and so when people come to visit it is satisfying when I can get them to also venture out and experience that part of me that is river.”

He also emphasized that the popular 3-mile Oxbow won’t be significantly affected by the drawdown. People flock to this lazy section of river for a relaxed tube float and that won’t need to change this summer.

“Regardless of how high or low the water level in the flowage is, all the water coming down the Pine and dropping over LaSalle Falls will continue straight through the dam, then downriver to the Oxbow,” he said.

There will be some areas of the reservoir that may not be accessible during the drawdown, but the Oxbow will be open the whole time. The reservoir is scheduled to begin refilling as soon as maintenance is completed. The refill rate and timing depends on precipitation runoff but is expected to return to normal levels in December.

Roberts urges everyone to get out and experience the river in this unique state, which may not happen again for decades, and to come back as often as possible to enjoy all the rivers of Florence County have to offer.

“How could it be said better than this, that these rivers are Wild Rivers and amazing rivers and ever-capable of stirring inner response,” said Roberts. “You won’t forget it. It grows. It has now become part of you, too.”