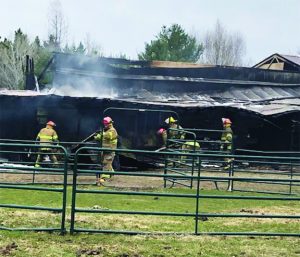 Dennis and Dorothy Kegley lost their horse barn for the second time this year, during a fire on Saturday, April 27. The main structure had collapsed during this winter’s heavy snow and ice load. Kegley was in the process of rebuilding his horse barn when it caught on fire. He was cutting sheet metal when a spark caught the hay on fire. He and a friend were on the roof of the lean-to when the fire started. Kegley burned his hands getting off the roof and his friend’s boots melted, causing a fall from the roof. She was bruised and sore but fine otherwise, as was Kegley.

The fire started at around 1:25 p.m. Kegley called 911 and told them it was a barn fire. Because of the poor quality of the call, the operator had a difficult time hearing him and ended up paging it as a bond fire instead of a barn fire. First at the scene were two men in a brush fire truck. They soon realized what kind of fire it was and called for more man power and tankers and backup from the Argonne Fire Department. There is no city water at the Kegley residence so tankers of water were needed. It took about two and a half hours to contain the fire. It flared up several hours later, and firefighters were called back and quickly extinguished the blaze.

The horses were not in the barn at the time of the fire.