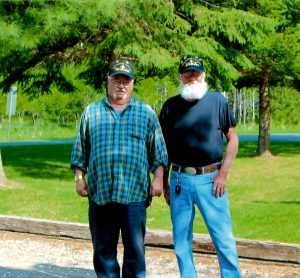 After nearly 51 years, Bob LeFleur of Florence and John Sawyer of Valparaiso, Indiana, both Vietnam veterans, were recently reunited.

In early June, the veterans, together with their wives, reunited at the LeFleur home in Florence.

“My wife Thelma and I were warmly welcomed to Bob and Deborah’s home and we spent two days with them,” said Sawyer. “We were given a grand tour of Florence County and the upper Michigan area.”

Sawyer offered a brief history of their service in Vietnam.

“In 1968, we served together in the Army with the B Company, 20th Engineer Battalion, 18th Engineer Brigade in Pleiku, Vietnam,” said Sawyer. “Bob and I lost contact with each other after Vietnam, and I recently bought a computer, hoping to locate him as well as other friends from our unit.”

After considerable research, Sawyer was able to find an old address for LeFleur and wrote him a letter.