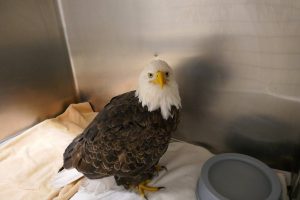 Through combined efforts of Homestead resident Mary Brunette, dispatcher Don Hirn, Conservation Warden Kelly Crotty and wildlife rehabilitators at Wild Instincts, Scout the eagle is hoped to recover from lead poisoning and a wing injury. Scout is currently in the care of Wild Instincts of Rhinelander after he was found near Scout Lake on Saturday.

A sick and injured bald eagle got its second chance at life on Saturday due to the quick thinking of Homestead resident Mary Brunette. While driving near Scout Lake on the afternoon of Feb. 2, Brunette noticed another car stopped, taking pictures of a bald eagle. This struck her as very odd, because in her experience a healthy eagle would fly away long before people could get close to it.

“I thought, that’s not right. That eagle doesn’t look like he’s acting right,” said Brunette. “He was dragging his left wing. He should have taken off, but he was just walking through the snow.”

Brunette called the Florence County Sheriff’s department and dispatcher Don Hirn quickly got in touch with DNR Conservation Warden Kelly Crotty. Crotty arrived approximately 45 minutes later, with a cage and supplies. Crotty was able to throw a blanket over the grounded eagle, who put up no resistance, and had him in the cage in less than five minutes.